I’m pretty suspicious about Keyforge. Or maybe not suspicious but skeptical. I have my considerations about the game, but on the other side I find some interesting elements in it, both from the selling model as from the design.

February brings finally some of the new ideas for 2019 to The Flatline! In this case, my personal approach to this -still- pretty new game of FFG.

I tried the game in my LGS this week. I don’t think that I can still decide my mind about it. So I got a deck, which will be my only Keyforge purchase. Promise.

Just to play with some of the friends that have also got into the game, which happens to be all the friends. But besides trying to stick as a fan of Richard Garfield’s designs, I wanted to put myself in a different area regarding Altered Cards. So this is the deal: alter all the cards! Try the game, test some materials and techniques.

Here you have the decklist. Any suggestions for the alts? Some advices for the deck? Should I stay with it or just put into the paper garbage bin? 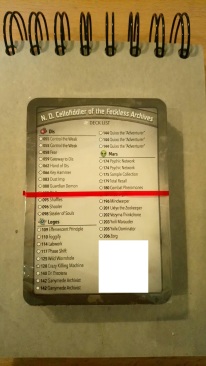 Stay tunned! You can find also the whole gallery in The Flatline‘s Facebook page.

I already paint one card. And lost two games 🙂 But it could be worst. (?)